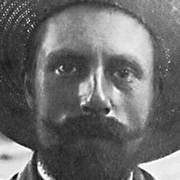 Fritz Overbeck (* 15 September 1869 in Bremen, † 7 June 1909 in Bröcken near Bremen-Vegesack; born as August Friedrich Overbeck) met Otto Modersohn and Fritz Mackensen at the Düsseldorf Academy and visited Worpswede for the first time in 1892 before settling there two years later. His paintings come to life with their colouristic interpretation of the moorlands, the use of colour in atmospheric settings of the most basic themes. In many of Overbeck’s works, the sky plays a major role. When the peaceful atmosphere of Worpswede was disturbed by the arrival of more and more artists, Overbeck was one of the first to leave the circle of old Worpswede masters in 1905 and resided in the town of Bröken near Vegesack until his untimely death.