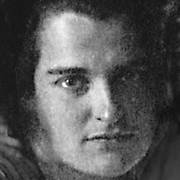 Clara Westhoff (* 21 September 1878 in Bremen; † 9 March 1954 in Fischerhude) was a German sculptress. Westhoff moved to Munich when she was but seventeen years old, where she attended a private school of painting. In 1898 she took drawing and shaping lessons with Fritz Mackensen in Worpswede. In Worpswede she became friends with Otto Modersohn and Paula Modersohn-Becker, among others, and was a frequent guest of the artist Heinrich Vogeler at his Barkenhoff residence, where in 1900 she also met her future husband, the poet Rainer Maria Rilke.
In 1900 she continued her training as a sculptress with Auguste Rodin in Paris. A year later she married Rainer Maria Rilke on the 28th of April and the couple moved to Westerwede, a neighbouring village of Worpswede. Although the marriage broke down, the relationship between Rilke and Clara Westhoff remained amicable. In the year 1919, Westhoff and her daughter moved to Fischerhude, where she lived for the rest of her life.