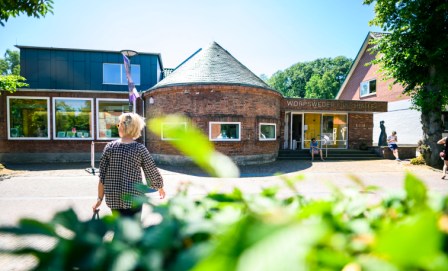 The Worpsweder Kunsthalle has one of the longest and richest traditions of all museums in Worpswede. The master bookbinder Friedrich Netzel began offering his workshop as an exhibition space for young artists when the artists' colony of Worpswede was still in its early stages. In 1919, his son Friedrich constructed a new building at the museum's present site in Bergstrasse which he furnished as a gallery and art dealer's office.

In addition to selling paintings, the Netzel family started collecting works from the founding generation of Worpswede artists. In line with this tradition, paintings of the second and third generation were also collected. As a result, the Worpsweder Kunsthalle today has probably the most important collection covering the entire art history of the town and which can be shown in changing exhibitions. Since 1999 a dedicated team of competent staff members and volunteers have continued the collection and museum as the art foundation "Worpsweder Kunststiftung Friedrich Netzel".

Once the refurbishment work is completed, visitor approaching the entrance from Bergstrasse will be greeted by a statue of Bernhard Hoetger, as if to announce that high-quality exhibitions will continue to be presented in this multifaceted and diverse museum. We will also be able to display a selection of sellable artworks from Worpswede.