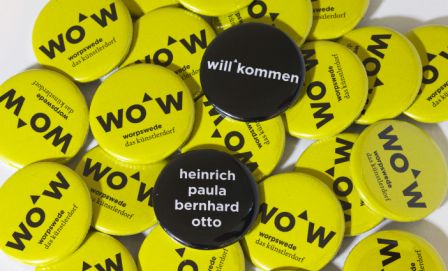 Over the course of many decades, the museum landscape in Worpswede has developed as a group of parallel but different institutions, usually established on the basis of a private initiative.

From 2007 to 2012, the Worpswede museums Barkenhoff, Grosse Kunstschau, Haus im Schluh and Worpsweder Kunsthalle, which had hitherto operated independently of one another, took advantage of a unique opportunity to fundamentally reinvent themselves structurally and conceptionally in a joint project under the auspices of the district of Osterholz and the municipality of Worpswede. They modernized and expanded their facilities and have been in close co-operation with each other in the »Worpswede Museum Association« since 2010. Each museum in the Museum Association contributes its own history and special profile in creating an unique overall experience for those visiting the artists' village of Worpswede.

Ever since then, in addition to mutual in-house co-ordination and support in all areas of museum management, the focus of this cooperation has been the presentation of large joint exhibitions in all four museum on a regular basis. Highlights of this collaboration to date include the exhibitions »Heinrich Vogeler. Artist, Dreamer, Visionary « (2012), »Myth and the Modern Spirit « and »INPUT/OUTPUT« to mark the 125th  anniversary of the Worpswede Artists' Colony in 2014 and »Kaleidoskop Worpswede« – the contribution made by the museums of Worpswede to the 800th  anniversary of the town in 2018.

Since 2016, the main office of the Worpswede Museum Association has been located at the Große Kunstschau Worpswede. Here is where a three-person team coordinates the collaboration of the four Worpswede museums, and it is from here that the major joint projects are planned and supervised. But above all, the office of the Museum Association is responsible for the joint external communication of the museum – such as contacting sponsors, various marketing and media tasks as well as cultivating the cooperation of the museums with many partners in Worpswede and beyond.

The renewal of the Worpswede Museum Landscape 2007-12 was funded by the European Regional Development Fund
We also thank the following sponsors for their generous commitment to this project.