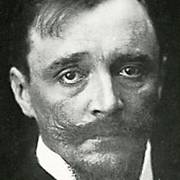 Carl Vinnen (* 28 August 1863 in Bremen; † 16 April 1922 in Munich) lived at his family’s estate at Osterndorf near Beverstedt and is thus not regarded as fully belonging to the inner circle of early Worpswede painters. In those first years, however, he was an important member of the group and was still regarded as the leader of the Worpswede painters on the occasion of their important 1895 exhibit in Munich. A few years later he distanced himself from the group of painters and from then on refused any association with it. His paintings come to life with their monumental view of nature which he developed in his moor landscapes and sea scenes.