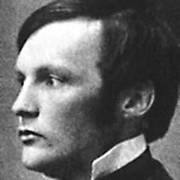 Heinrich Vogeler (* 12 December 1872 in Bremen; † 14 June 1942 near Korneyevka, Karaganda, Kazakhstan) was a German painter, graphic artist, architect, designer, teacher, writer and socialist. He was both the youngest and last member of the old group of painters in Worpswede, which he joined in 1884 after finishing his studies at the Academy of Düsseldorf. By the turn of the century Vogeler had developed into one of the most important representatives of German Jugendstil. In particular, his work as a graphic artist and designer won him national and international acclaim. When public infatuation with Jugendstil started to wane, Vogeler looked for new artistic directions. The First World War, where he volunteered for military service, marked a turning point in his life. Returning as a staunch pacifist and socialist, he attempted to live up to his world view as an artist as well. His work took on an expressionist character that reflected his political convictions. Starting in 1923, Vogeler made regular visits to Moscow. In 1924, he moved to Berlin before migrating to the Soviet Union in 1931. There Vogeler put himself entirely at the service of communism, actively fought against National Socialism but was nevertheless deported to Kazakhstan after the German invasion of the Soviet Union. There he died, destitute and malnourished, in 1942.