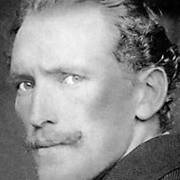 Fritz Mackensen (* 8 April 1866 in Greene near Kreiensen; † 12 May 1953 in Worpswede) was the first painter in Worpswede. Starting in 1894, while still a student at the Düsseldorf Art Academy, he came here regularly in the summer months to paint. He was soon followed by his fellow student Otto Modersohn. In 1889 they decided not to return to the Academy, thus laying the cornerstone for the Worpswede’s first group of painters. An award for Mackensen’s painting "Gottesdienst im Freien" (Open-air Church Service) in 1895 marked the start of the artists’ village’s rapidly growing fame and established the name of Worpswede in the world of German art. In 1908 Mackensen became a professor at the Academy of Art in Weimar, and its director in 1910. In the years 1933 to 1934 he was the director of the "Nordische Kunstschule" in Bremen (now known as University of the Arts Bremen).
In the year 1953 Fritz Mackensen died in Worpswede, the last of that generation of painters who brought world fame to the village in the moors. Despite their orientation toward landscapes, his own paintings focussed primarily on figurative expression, on naturalistic studies of peasant life but also in a heroic transfiguration of the simple life.