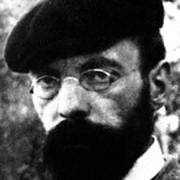 Friedrich Wilhelm Otto Modersohn (* 22 February 1865 in Soest, Westfalen; † 10 March 1943 in Rotenburg (Wümme)) was one of the first and most consistent painters in Worpswede. In 1884 he started his studies at the Düsseldorf Art Academy but transferred to the Karlsruhe Art Academy in 1888.
In July of 1889 he met with Fritz Mackensen and Hans am Ende in Worpswede, where they founded the artists’ colony of Worpswede.
In 1897 he married Helene Schröder, who bore him a daughter (Elsbeth, † 1984) in 1898. In 1899 Modersohn left the artist association. His wife died in 1900, but just one year later he married the painter Paula Becker.
After a temporary separation they returned together to Worpswede in 1907, where their daughter Mathilde (“Tille”) was born the same year. Paula Modersohn-Becker died of an embolism shortly after giving birth.
His atmospheric depiction of landscapes based on a romantic sentiment toward nature became the epitome of the Worpswede school of painting even prior to the turn of the century.
In 1908 Modersohn moved to the neighbouring village of Fischerhude. In 1909 he married his third wife, Louise Breling, with whom he had two sons (Ulrich, *1913 † 1943 and Christian, *1916).