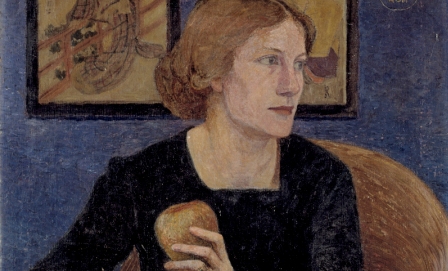 As a result of his close relationship to the young Martha Schröder, Heinrich Vogeler experienced Worpswede and its surroundings more directly from 1894 onwards, increasingly distancing himself from the initial historical-style themes in his painting. Due his love for the young girl, the Worpswede landscape with its hills and moors became poetically charged and alive for him. Martha showed him nature and the simple life of the people.

The founding of the Haus im Schluh in 1920 marked a decisive milestone in the history of Worpswede. Martha Vogeler, Heinrich Vogeler's first wife, established her own livelihood with her three daughters and finally broke away from her role as muse and model. »Martha Vogeler. Living with Art« relates the impressive history of a woman from Worpswede, whose role and importance is reappraised on the occasion of the 100th anniversary of Haus im Schluh. The early works of Heinrich Vogeler are presented in a new, informative perspective: It shows how greatly these works were inspired by Martha in conjunction with the exhibition.