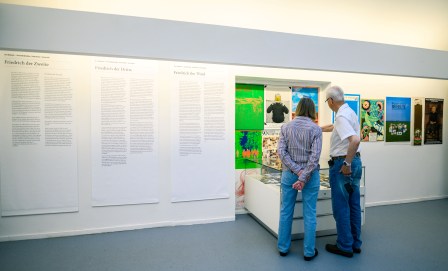 After young artists discovered the farming village in the peat moors in 1889 and decided to live and work there, they soon wished to exhibit and sell their works. At first, it was the local master bookbinder Friedrich Netzel who let them use his shop and adjoining rooms. Then in 1919 his son, likewise called Friedrich (II), built his own house as a gallery in the centre of the village. Here, in Bergstrasse, he moved in with his young wife Maria and provided a home for contemporary art.

In addition to trading in art, he collected and preserved museum paintings. Upon the early demise of the gallerist in 1945, his wife continued the business in the difficult post-war years in order to pass it on to her son Friedrich (III).

In addition to showing his family's own collection spanning three generations, he hosted widely-admired special exhibitions which put the artists' village in the national spotlight:
- exhibitions in 1972, 1973 and 1989 of Heinrich Vogeler's complete works, including the first-ever showing of works from his Soviet period,
- exhibitions of East German art in 1978 and 1984, long before any official cultural agreement,
- the first exhibition of Max Ernst and Duane Henson,
- exhibitions of French artists from Bram van Velde to Jean Cocteau from the 1960s to the 1980s,
- the first major exhibition in Worpswede of Paula Modersohn-Becker on the occasion of her 100th birthday in 1972 and, for the centenary celebrations of the artists' village in 1989, the first major retrospective exhibits showcasing the art of Worpswede with a high-quality cross-section covering many decades ­- at the time in cooperation with other Worpswede museums.

After the death of the gallerist and collector Friedrich Netzel, a foundation was established upon his wish in order to ensure the future preservation of the rich and diverse art collection for the town and its visitors. Since 1999, the work of the "Worpswede Art Foundation of Friedrich Netzel" has been continued by a dedicated team of talented staff members and employees. The private museums in Worpswede operate without public institutional support. For that reason, our museum also depends on entrance fees and donations. Donations in kind and works on permanent loan, such as museum-appropriate works of art and handicrafts from the Worpswede region, are also sincerely welcome. We will provide them with the appropriate supervision and presentation.