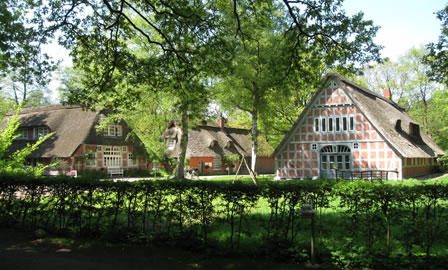 After separating from Heinrich Vogeler and moving out of the Barkenhoff, Martha Vogeler found the house of her dreams in the Haus im Schluh. In 1919, she discovered an old farmhouse built in the Low Saxon style and promptly bought it. The house was torn down at its old site and reconstructed at the location im Schluh.

The same year she also had a small outbuilding built in which a hand weaving mill was soon installed. Together with her three daughters, Mieke, Bettina and Mascha, Martha Vogeler earned her living with the hand weaving mill, running a guesthouse and cultivating a large vegetable garden. But Martha Vogeler and her daughters also made handicrafts and were quite skilled at it. For example Bettina, the middle daughter, produced wonderful tapestries based on the beautiful designs made by her husband Walter Müller.

In the 1930s, another house was added which, like the first house, had a long history as a farmhouse to look back on. The hand weaving mill was then moved here.

Starting in the 1950s, the Ottilie Hoffmann guesthouse offered reasonably-priced lunches as well as coffee and cake in the bower and in the house itself. Likewise located in Haus im Schluh is the Worpsweder Archive, which was founded and organised by Hans-Herman Rief.

Over the years, the open, welcoming atmosphere of Haus im Schluh and Martha Vogeler attracted many artists, writers and creative minds to these houses. Here one could find an atmosphere of free-thinking and creative exchange. While some were only there for a stopover, others remained for years or even their entire life. When Martha Vogeler died in 1961, her daughters Bettina and Mascha took over the hand weaving mill and the guesthouse.

Haus im Schluh is still run by the family, now in its 4th generation. This family tradition thus forms a living bridge between yesterday and today.