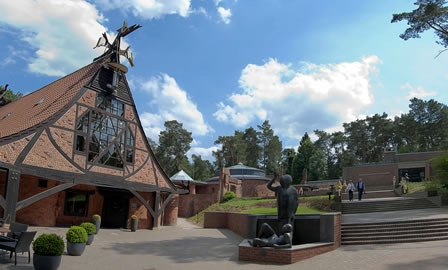 The museum and its collection

Inspired by his acquaintance with Paula Modersohn-Becker, Bernhard Hoetger came to Worpswede in 1914. The sculptor stayed for fifteen years and turned a variety of architectural ideas into reality. While Hoetger’s expressive style took on more mature forms during his Worpswede period, he was increasingly attracted to mythical folkish thought. His largest buildings formed three interrelated structures that were built in succession. Kaffee Worpswede, the Logierhaus and the Große Kunstschau were constructed in the years 1925-1927. Today this architectural ensemble is considered one of the few surviving examples of North German Impressionism.

Built in 1927, the Große Kunstschau and Kaffee Worpswede, which was subsequently connected to it, served as an exhibition location for local artists and for presenting the works of Worpswede’s first generation of artists. Made of red brick, the building is structured like a sculpture. The main body is arranged around a rotunda with a suspended cupola. Its skylight provided ample natural light, thus allowing for an indirect and even illumination of the works.

Since its construction the Große Kunstschau has remained Worpswede’s largest exhibition location. Until the 1960s it presented temporary sales exhibitions, later it was here that the private art collection of the Bremen coffee merchant Ludwig Roselius (Kaffee HAG) was housed on a permanent basis. In the 1980s, a large portion of his art collection comprising works of Worpswede’s first generation of artists were purchased and, as works on loan from various patrons, form the basis of today’s permanent exhibition.

In 1999 the newly-founded Cultural Foundation of the Osterholz District took over the ensemble. In December of 2004 the rotunda had to be closed off due to the danger of immanent collapse; in February of 2008 the completely renovated Hoetger ensemble (Kaffee Worpswede had been renovated several years earlier) could be re-opened. The museum reproduced Hoetger’s original colour scheme but at the same time installed a completely new, state-of-the-art climate control system underneath its historic exterior. The heart of the exhibition is the newly renovated rotunda, where normally a selection of works by Worpswede’s first generation of artists (Heinrich Vogeler, Otto Modersohn, Paula Modersohn-Becker, Hans am Ende, Fritz Overbeck, Fritz Mackensen and Carl Vinnen) are on display. The former museum shop – also preserved in its original form – today provides visitors with an overview of Bernhard Hoetger’s creative work.

Kaffee Worpswede
With the construction of Kaffee Worpswede in 1925, Bernhard Hoetger laid the foundation for today’s overall ensemble of the Große Kunstschau. Kaffee Worpswede comprises three structures. The dominating one, featuring gables and ridge turrets in its central part, has a vaulted, round interior. This main room is oriented toward a raised area which ends in an outdoor terrace. Located in the middle of the room is a Tree of Paradise, a wood sculpture by Hoetger. With its half-timbered façade and exotic roof turrets, Kaffee Worpswede is commonly referred to as “Kaffee Verrückt”, the “Crazy Café”. In the course of the 2002/2003 restoration project, its façade, roof and supply facilities were refurbished and modernised, and the original Hoetger paintings and roof turrets were reconstructed.
The leaseholder of Kaffee Worpswede is Jens Kommerau, who grew up in Worpswede. Before fulfilling his dream of running Kaffee Worpswede with his wife Suzana, he used to be a chef at leading hotel restaurants in Berlin, London and Switzerland. At Kaffee Worpswede his culinary creations are a real treat to be enjoyed in an authentic Hoetger atmosphere.

The Logierhaus
Built next to the Große Kunstschau, the Logierhaus served as a (modest) hotel until 1978. From 1982 to 2004, the building was used as an art lending library and was where exhibitions were also held. Upon completion of extensive renovation work in July of 2007, it now serves as the administrative office of the “Kulturstiftung Landkreis Osterholz”.

The new Große Kunstschau
The Ludwig Roselius Museum for Pre-History and Early History, designed by the Bremen architect Prof. Gerhard Müller-Menckens, was built adjacent to the Große Kunstschau as early as 1971 and incorporated the Roselius collection on this topic. The low-rise building had six columns and a foyer grouped around an inner courtyard, providing an exhibition space of approximately 500 square metres. In 2010/11 the inner courtyard was converted into two connected exhibition halls, thereby increasing the exhibition space by 140 sq. m to a total of 640 sq. m. A climate-controlled depot was also added below them. In the process, the entire building was modernised and furnished to meet present-day standards for state-of-the-art museums. The new Große Kunstschau was inaugurated in 2011 with an exhibition of selected works from the collection of the Federal Republic of Germany and it continues to offer a modern and up-to-date setting for temporary exhibitions of current and contemporary art.