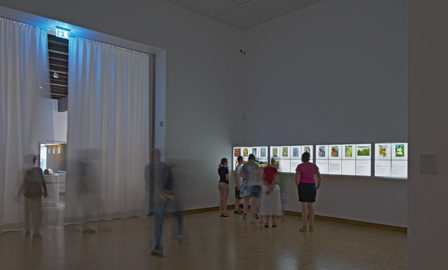 The foundation operates the historic Hoetger Ensemble, at the centre of which is the Grosse Kunstschau Worpswede, the largest museum in the artists' village. With the renovation of Kaffee Worpswede and the Große Kunstschau, as well as the enlargement and renovation of the former Roselius Museum under the auspices of the Worpswede Master Plan, the Kulturstiftung has already been able to make valuable contributions in enhancing the quality of Worpswede's museum landscape since its establishment.

Another milestone in the architectural upgrading of the Hoetger Ensemble and the increased attractiveness of Worpswede's town centre will be the renewed renovation of Kaffee Worpswede according to the intentions of its creator Bernhard Hoetger. This project is currently in the planning stage and is expected to be implemented in 2022/23.

The sponsorship of the museum complex in Osterholz-Scharmbeck, which the Kulturstiftung had also held since its founding, was taken over by the Association of Friends and Sponsors of the Museum of Local History and the North German Avian Museum in 2017 and was transferred to the newly founded North German Avian Museum – Osterholz Museum Complex at the start of 2020. Since then, the museum complex has been managed under its own sponsorship and run by a team of dedicated volunteers, friends and supporters.