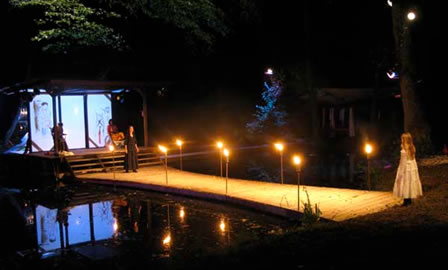 “The Barkenhoff of Worpswede – if this wild and romantic setting did not already exist, it would simply have to have been invented.”
Sonntagsjournal, 09 July 2006

In the course of organising the joint project entitled “Rilke. Worpswede” in 2003,  Beate C. Arnold, scientific director of the Barkenhoff Foundation of Worpswede, had the idea of reviving Vogeler’s garden performances. Together with the Cosmos Factory Theaterproduktion, a professional independent theatre group, she developed a concept for a play which took up the tradition of Vogeler’s garden performances and projected them into the present: the SUMMER THEATRE AT THE BARKENHOFF in Worpswede was born. The enthusiastic reception given to the first summer theatre production, RILKE 1903, made a follow-up appear quite reasonable.

Since then, the Cosmos Factory has for seven times put on a production devoted to Worpswede themes that is specially created for the setting around the Barkenhoff pond and staged for a month each summer.

The special quality of the Summer Theatre projects is based on the creative process of the Cosmos Factory: The first stage in its development of a play always begins with an in-depth study of original sources. After intensive research (in archives and personal papers as well as interviews with contemporary witnesses) the plays are then developed on the basis of extensive original documentation in order to ensure the greatest possible degree of authenticity.
But even though the productions are quite consistent in their biographical echo and accurate historical references, the Summer Theatre projects are much more than merely “documentary theatre”. They succeed, in content as well as in aesthetic appeal, in creating artistic worlds of their very own.

The unique synthesis of documenting local historic sources in a scientific manner, transforming the results of this research into aesthetically groundbreaking contemporary theatre and using the landscape as a source of inspiration as well as a backdrop for the production itself make up the special charm of the Summer Theatre productions which never fail to delight their audiences.

We regret that, due to ongoing renovation work as part of the Worpswede Master Plan, no productions will be held at the Barkenhoff during 2012.